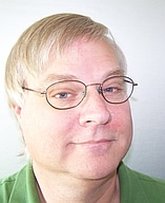 I'm Eric, a husband, a father, a grandfather, and an author.  Thank you for visiting my site and thank you for your interest.  Take a look around.  You'll find information about my books, including links to retailers.  You'll be able to read some samples of my unedited writings, some helpful instructions, my blog, links to some of my interests and friends, and more.

Most of my adult life has been spent working in the electrical, electronics, and telecommunications industries, with side interests in computers and video.  It wasn't until my father was battling Cancer that I discovered a knack for writing.  I was spending many hours in waiting rooms, treatment rooms, recovery rooms, etc.  I began writing SEAMS16: A New Home to pass the time.  There is no direct relationship between my father's battle and the story I was writing, rather, the writing became an escape from the depressing circumstances and helped me maintain a positive attitude toward his treatments.  Sadly, my dad died before I finished the story and he was not able to read it, but I like to think he would approve.
My second novel, SEAMS16: Arrival, a sequel, was also written primarily in waiting rooms, recovery rooms, etc. while my mother underwent knee replacement surgery and the subsequent recovery.  (It takes longer when you're in your 80s.)  Mom is doing great and walking better than she has in years.  She has read and approved both books, even though she's not an avid fan of Sci-Fi.
The covers for my books are created by my brother, Lanin, and we worked together to develop my first children's book, Sam And The Dragon.  I wrote the story and he created the illustrations.  The title was provided by my niece's daughters, Katelyn and Emily, (ages 5 and 3 at the time) and was also suggested by my cousin Joanne.  We followed this up with another children's book, Billy's Family, a third, The Wizards of the Body Shop, a fourth, Yeti In The Freezer, and a fifth, Everyday Wonders.
I also released a third novel, And So It Begins..., proving that I can still write, even when I'm not spending a lot of time in medical buildings.  It is a story about the origins of the society that the first two novels come from.  It takes place roughly 1000 years before SEAMS16 is constructed, so it is technically not a SEAMS16 novel, but I consider it part of the series. I released a fourth, SEAMS16: Friends and Foes, picking up where Arrival left off. The fifth in the series, The Klindoran War, primarily takes place sometime between And So It Begins... and A New Home, providing more historical context.
The Light of an Alternate Sun is a bit of a departure from my normal writing in that it is neither a children's book, nor part of the SEAMS16 series. It was written for two horse lovers who hold a special place in my heart.